Create an Account - Increase your productivity, customize your experience, and engage in information you care about.

The Floyd County Freedom Rock in Rockford, IA is complete.  Rockford is a nice little town on the Shell Rock River southeast of Mason City.  They are the former home of Rockford Brick and Tile which mined the area for blue shale to be used in the production of ag drainage tiles and building bricks. It’s now a world-class fossil collecting locale. The Floyd Co Freedom Rock committee was a great diverse group of townsfolk that after some lengthy discussions understood my vision for their rock and are now deep into their discussions on landscaping and developing the area around the rock, I wish them good luck.

Our idea for the rock was like a lot of stops on the tour, the combination of them wanting to represent all the branches and me wanting to illustrate individuals who’ve served from their county.  We were able to come to a compromise that I think you’ll enjoy.

First, we couldn’t land on a specific Marine so they asked if they could be represented by their mascot and motto, the bulldog/devil dog and Semper Fi (Short for Semper Fidelis, Latin for Always Faithful).

On the side with the devil dog is Ed Trettin.  Ed joined the Coast Guard shortly before Pearl Harbor was bombed in ’41. Ed became one of the top gunners for the Coast Guard cutter the USS Ingham, which is one of the most decorated ships in the U.S. fleet, and received a presidential citation.  Ed saw combat on a regular basis in the North Atlantic versus German U-boats and Submarines, as well as, saved a fellow Iowan’s life when he pulled him from the cold ocean waters. Ed gave the soldier a button off his coat to recognize each other later.  After the war when the soldier tracked Ed down in Rockford, Ed didn’t remember him at first, but the he pulled out the button and Ed recognized it immediately.  So that’s why I portrayed Ed with a Coast Guard button and the Ingham.

On the West side of the rock is Medal of Honor recipient and Charles City born, Paul F. Riordan.  His citation reads: For conspicuous gallantry and intrepidity above and beyond the call of duty. In the attack on the approaches to the city of Cassino on February 3, 1944, 2d Lt. Riordan led 1 of the assault platoons. Attacking Hill 175, his command was pinned down by enemy machinegun fire from the hill and from a pillbox about 45 yards to the right of the hill. In the face of intense fire, 2d Lt. Riordan moved out in full view of the enemy gunners to reach a position from where he could throw a handgrenade into the pillbox. Then, getting to his knees, he hurled the grenade approximately 45 yards, scoring a direct hit. The grenade killed 1 and wounded the other 2 Germans in the nest and silenced the gun. Another soldier then cleaned out the enemy pillboxes on the hill itself, and the company took its objective. Continuing the assault into Cassino itself on February 8, 1944, 2d Lt. Riordan and his platoon were given the mission of taking the city jail house, one of the enemy's several strongpoints. Again 2d Lt. Riordan took the lead and managed to get through the ring of enemy fire covering the approaches and reached the building. His platoon, however, could not get through the intense fire and was cut off. 2d Lt. Riordan, aware that his men were unable to follow, determined to carry on single-handed, but the numerically superior enemy force was too much for him to overcome, and he was killed by enemy small-arms fire after disposing of at least 2 of the defenders. 2d Lt. Riordan's bravery and extraordinary heroism in the face of almost certain death were an inspiration to his men and exemplify the highest traditions of the U.S. Armed Forces.

On the north side of the rock are two more men who gave their lives in service to our country.  Captain Timmie Ward was killed while serving in Vietnam.  Shortly before dawn on August 12th, 1972, he took off on a C-130E from Soc Trang. As the aircraft climbed through 500 feet it was hit by enemy fire and crashed near the airfield. Hobson's 'Vietnam Air Losses' states that 30 of the 44 persons aboard were killed, but only 13 US servicemen can be identified as lost in the crash - 7 aircrew and 6 passengers. The remaining 17 persons must have been US civilians and/or SVN personnel.

Jon Tomilson of Rockford, Iowa; assigned to an East Coast-based SEAL team; died Aug 2011 in the Wardak province, Afghanistan of wounds suffered when the CH-47 Chinook helicopter in which he was riding was shot down. The chopper was transporting a Quick Reaction Force team attempting to reinforce an engaged unit of Army Rangers. The resulting crash killed all 38 people on board — 22 Navy SEALs and Naval Special Warfare support personnel, three Air Force Special Operations forces, five Army National Guard and Army Reserve crewmen, seven Afghan commandos, and one Afghan interpreter — as well as a U.S. military working dog. This was considered the worst loss of U.S Military life in the Afghanistan campaign, surpassing Operation Red Wings in 2005.  To friends and family, Jon Tumilson, known as JT, died doing what he loved. “If JT had known he was going to be shot down when going to the aid of others he would have went anyway.”

Of course, the American flag is draped over the rock representing all Americans.

Hope you all enjoy this addition to the Freedom Rock Tour and thank you Veterans for serving our country. 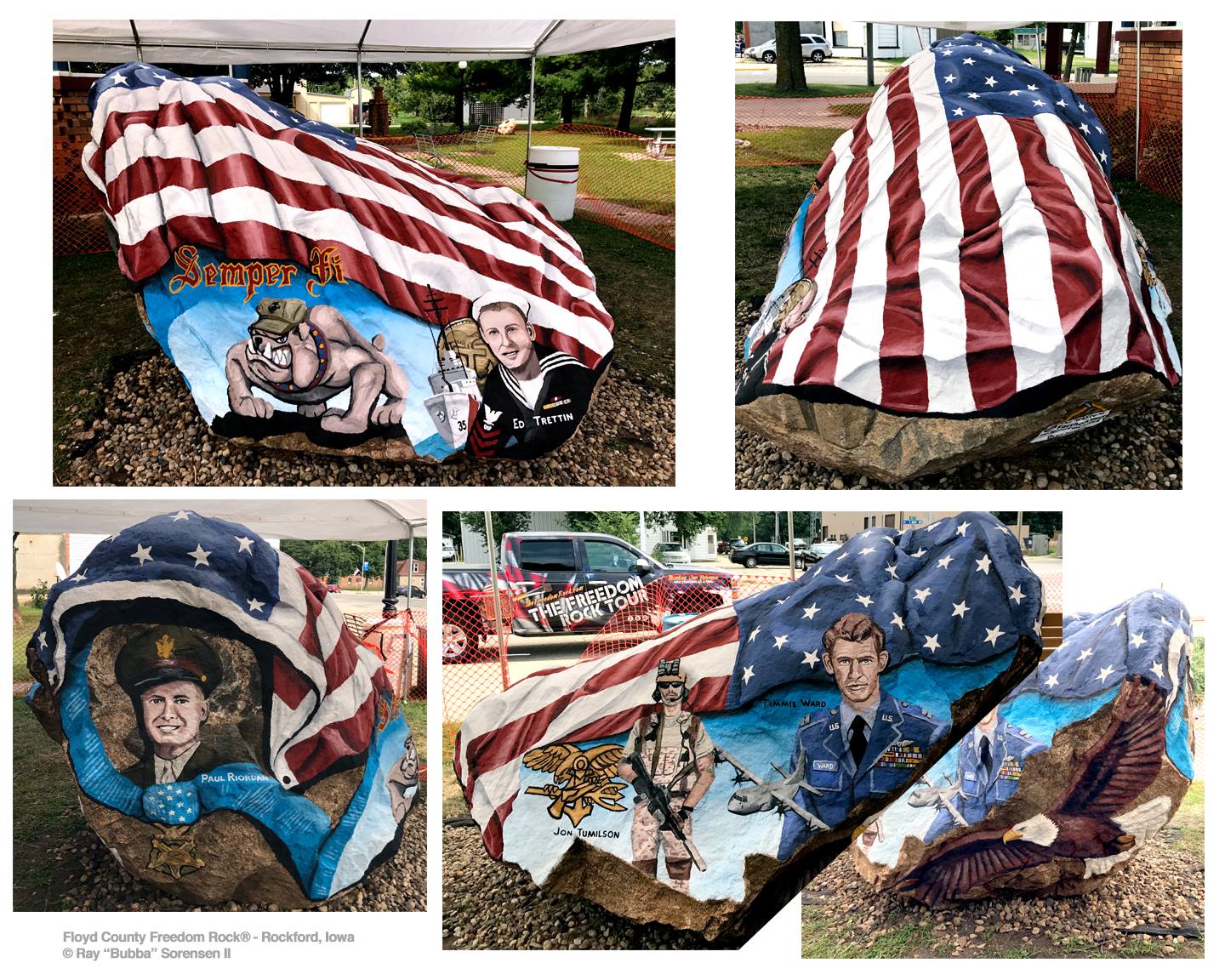 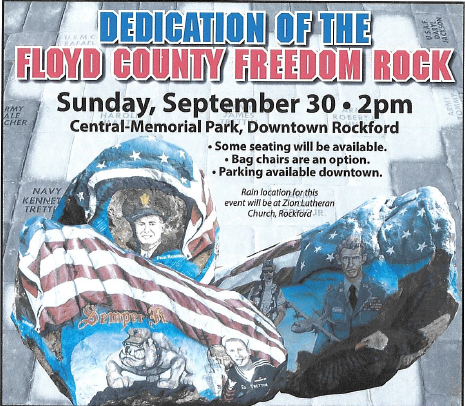